Guangzhou airport – where it started and where it all ended. Literally. Upon arriving there for my layover from Thailand before flying back to New York, I discovered that my precious laptop (containing all of my essays), was damaged. Thanks to a barely traceable amount of moisture that made its way into my book bag, onto my laptop, and into the back of the casing – I am officially without a computer. I intend to rewrite about my trip in due time, but this is what I was able to scribble in my notebook without sobbing over my now ruined piece of hardware.

As always, thank you for reading! And apologies for the very long hiatus.

It was winter… Depression. You understand. 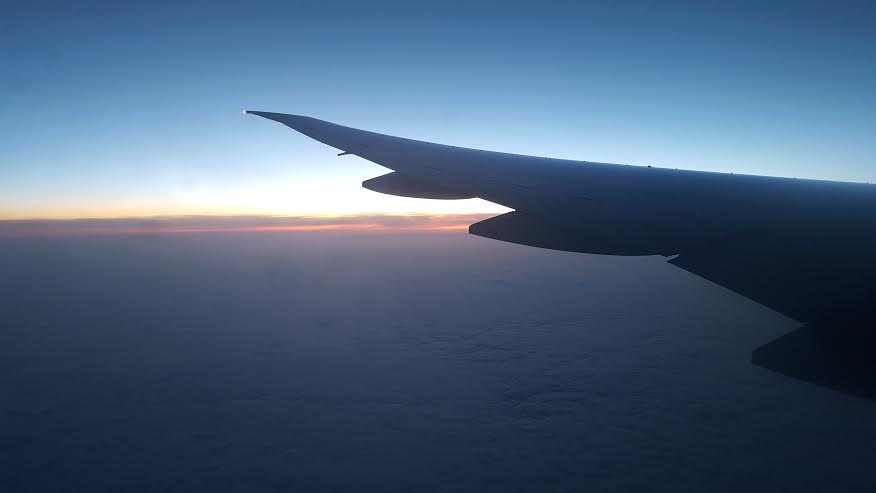 Flight: one of the most illustrious of mankind’s achievements.

While nothing short of miraculous it is also absolute fucking torture. If you’ve ever been subject to the test of human endurance that is an eight-hour-or-longer flight, then you know the feeling. Your ass goes numb, your legs get swollen, your mind vacillates between boredom and delirium; between settling on the least shitty in-flight movie you never really wanted to see and staring woefully at the emergency exit wondering what would really happen if you pulled the hatch…

Just try not to pull the hatch.

By the time the aircraft lands we think, “Wow, I did it!” We feel an undeserved sense of accomplishment as though we had any other choice, as if our mere presence in the fuselage was somehow responsible for keeping the plane in the air.

Still, perhaps the cruelest part of all this is the layover. A layover is equal to a flight in its mind numbing effect except you don’t have the benefit actually GOING anywhere. Unless you’re in a ‘fancy’ airport, located in a popular tourist city or filled with stores, restaurants, hotel accommodations, etc., you are simply put – stranded. The charming airport in which I would be spending my layovers was Guangzhou Baiyun International Airport.

It is free of wifi, air conditioning, or any form of sustenance outside of that provided from a small “Coffee Shop,” located at the far end of the terminal where I would spend about 4 of my 7 hour stays just trying to pass the time.

I say coffee shop very loosely for while it’s labeled that way, it is most certainly NOT a coffee shop. When I first arrived here for my flight to Thailand, I attempted to order a coffee.

“No coffee, latte only.”

I paid up and waited ten minutes only to receive a cup of warm milk with a trace amount of espresso that even the frilliest of Starbucks drinks would scoff at. Mind you, 80 yuan is equal to 12 American dollars.

I took a seat and soaked in the ambiance of the Guangzhou airport coffee shop. Allow me to limn a picture for you: Dim lights flicker from a low ceiling with fans that don’t appear to have ever been used. A far wall is covered in beige wallpaper with faded grey filigree while rest are wood panelled. The chairs are upholstered in a deep red faux suede but they’re marked with various stains from years of wear. The interior designer must have been seeking the perfect cross between a family basement circa 1975 and a casino buffet.

Next to my table sits a glass case with a mirrored backing; it shelves dusty bottles of Johnny Walker comically labeled for purchase.

Under the sound of whirring espresso machines and indecipherable chatter, Brenda Lee’s “Rockin’ Around the Christmas Tree” plays on the loudspeaker. When it plays for the fifth time I realize that this is actually hell. I am in hell.

I spent the next 5 hours passing the time by talking to a police officer from Ohio with a strong southern accent who was visiting Cambodia to, “get wasted for the new year.” But I pressed him about his chosen profession and I found him to be very generous in his responses. My anonymity provided a safety that made way for a very illicit session of: Tales from the Force. I was also pleased with myself when three things I had guessed about him turned out to be true: He served in the National Guard, he vehemently believes in the right to bear arms, and from what I gathered, he had the intelligence of the average 16 year old.

Ten days later and I find myself back in this dreary place but without a stranger-companion to pass the time and 7 hours to go before I could board my flight home. So I’ve resorted to eavesdropping on a young woman from Brooklyn giving a self-extolling dithyramb to a cute captive in a Moby t-shirt with a well groomed beard who has a layover that I can only imagine exceeds four hours – it’s the only way that he would subject himself to this.

Brooklyn girl has barely taken a breath in the delivery of her life story sprinkled with thoughtfully selected factoids – what books she likes, what music she listens to, down to the means by which she’s decorated her “small new york city apartment.”

“I refinished some old furniture and painted it myself because you know, I’m a DIYer.”

With nowhere else to go (and an admittedly vested interest in Brooklyn girl’s puported dog-rescuing efforts), I listened to two more hours of her desperate inveiglement –

Little does she know – she could be exerting a fraction of the energy she’s wasting and he would still have sex with her.

Look! It’s me and I’m in Thailand! Can’t you tell?

Tuning into the voices around me makes me acutely aware of the nature by which we speak in my native language. In English, we use inflection and tone to convey emotion and intention. But in Chinese, something as simple as the tone of a word can determine the very definition of it. However volume, a distinguishing element in English, holds zero bearing. Every conversation (no matter how inane the subject matter), is held at a decibel reserved only for the hard of hearing. Or those standing in a wind tunnel. I consider that the free earplugs provided by China Southern Airlines would be better suited for sitting in this airport than trying to mute the bombinations of a jet engine.

I suddenly feel very close-minded for my sentiments and I remind myself, “Bryn! You are literally on the opposite side of the planet. Grow up.”

Then an elderly chinese woman coughs with all the vigor of a stage three tuberculosis patient and I’m back to my bigotry. Yet another social custom not adopted in China – coughs, sneezes and farts are the heartiest I’ve ever encountered.

Speaking of sickness… I think I choose being inside this airport over ever stepping foot onto the soil here in Guangzhou. I look outside and see that the sky is a permanent grey cast, the air (even inside) is thick with humidity and what I can only surmise is that infamous smog.

This is bleakness. This is the biological manifestation of the plague that is capitalism. Greed making the earth sick. I wonder what kind of life forms this atmosphere could be conducive to. What organism – human, plant, or animal – could thrive in the biome of industrialism? It’s no wonder that a phone screen provides more solace than the world surrounding it. There is no world!

“I need to stand up,” I think, “I’ve got to get my blood flowing before I embark on my 15 hour, marathon ass-sitting.” So I find myself a relatively spacious spot to do some yoga while I receive countless stares of confusion and/or disapproval. Fine! You might find it strange of me to be in downward-facing dog in the middle of a passenger terminal but I find it strange that you are taking a selfie… all the time.

The Chinese are in a constant state of selfie taking. It doesn’t matter where they are or what they are doing, rest assured that they have one arm outstretched (or thanks to the advent of selfie-sticks – one elbow pressed to their side), with the camera of their phone aimed at their face. Sure! I’m guilty of taking a few selfies, (okay, many), but I’ve never seen the olympic level of selfie-ing that exists in this part of the world.

*Side note: If anyone were to get ahold of my phone they would discover a slew of selfies, all of which appear to be exactly the same photo – but let me be clear! They are different. If you pay close attention you’ll notice the slight tilts of my head or the barely perceptible change of my expression. A tedious attempt to look “pretty,” while remaining careful not to reveal my uneven smile or my long nose. I must say I’ve gotten better at it over the years.

Chinese people are lovely and I’m bitter as I’ve been sitting in an airport for 7 hours. But all of that is about to change as I’ve just taken a valium (thank you, Thailand pharmacies). I am praying to the Gods of drug-induced slumber – may I sleep through this flight enough to have felt teleported back to New York.

Beam me up, Scotty!