It’s a cold, wet, spring morning; I can hear birds chirping outside – which is unusual because I live in Brooklyn. But the sound of their songs and the smell of this air awakens a warm feeling inside me. A feeling formed with those first memories of spring that you create as a child – when every sense was heightened, more aware. More alive. These days I feel like I barely pull my eyes away from a screen for long enough to actually stop and observe the world around me. To be in it. I worry sometimes that I have no connection to it anymore.

I think about the cemetery, how it must be beautiful there today. A patch of damp earth resting six feet above a pine box that holds her body (or a body that was once hers). Strangely, it’s less than a mile away from where I went to summer camp when I was 12 and 13, and where I believe I developed my most potent sensory memories of spring/summer.

I cherish those days I spent at camp in the woods; every single day I was outside, in nature! Steep hills, mossy dirt and towering trees which stretched for miles – those were my surroundings. And while I thought nothing of it at the time, I realize now how much it nurtured me.

Now everything feels artificial. Empty. Commodified. (Perhaps just the perils of spending too much of my time in the city?)

The shops take on a pastel pallor designed to invoke the splendor of spring: turquoise, lavender, canary yellow and baby pink. Every trinket is presented in a plastic egg to “hatch,” selling the adorable illusion that it had been germinating… rather than shot off of an assembly line in Guangzhou. 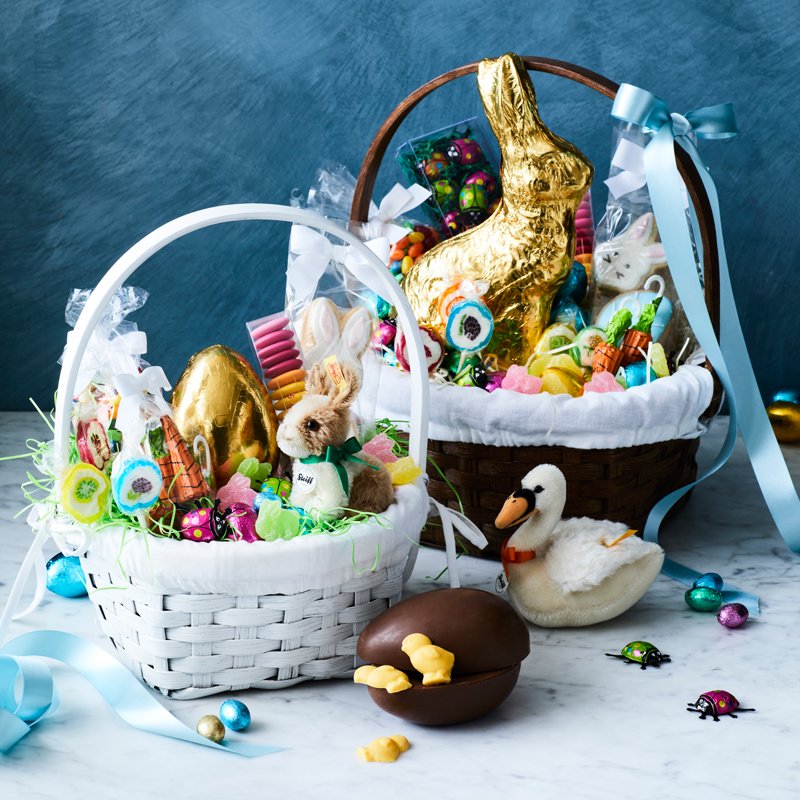 Marshmallow ducklings and leporine chocolates stock the shelves of pharmacies surrounded by bags of plastic containing what else but – more plastic! Dyed green and shredded to resemble grass to be used but once, to shove in a basket (also, presumably, to be used just once), and then discarded. A tiny pastoral scene out of a George Saunders novel.

Easter and Passover happen to fall on the same weekend this year; Easter Sunday also being April Fool’s day. An irony reserved not just for the smug atheists of the world, (I don’t know what I believe in, but I do believe that’s fucking funny).

Actually, while to most it carries about as much significance as Arbour Day, I hold a special place for this holiday, because I grew up listening to the song April Fools by Rufus Wainwright. When his first album came out, my mother, (the O.G. hipster, discovering all of the great music artists years before anyone knew their name), would play it on repeat in the car. I don’t think I had an inkling as to what his lyrics meant at the time, but

Looking at the sky,

Wondering if there’s clouds and stuff in hell…”

was just the narration I needed while I laid my head on the backseat and watched the clouds go by above the parkway. She even taped the music video for me when it aired on VH1 – I remember the moment she showed it to me. Rufus was beautiful, boyish, and gay as the day is long; hopping along in his black t-shirt and surrounding himself with a cadre of characters – beloved tragic-heroines from his favorite operas: Tosca, Mimi, Gilda, Cio Cio San and Carmen. God, do I love him. 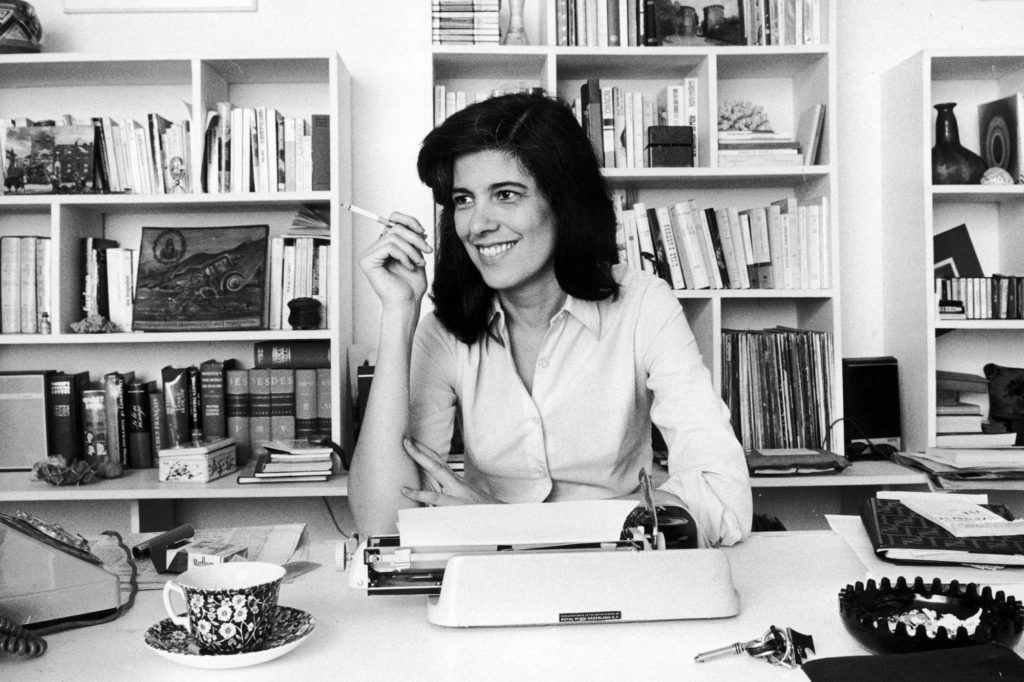 The other day I read passages from Susan Sontag’s book, On Photography, and they’ve been on my mind ever since. They read:

“To take a photograph is to participate in another person’s mortality, vulnerability, mutability. Precisely by slicing out this moment and freezing it, all photographs testify to time’s relentless melt.”

Oy. Needless to say I’ve been ruminating on it. During the time of year when we’re meant to ponder birth, new life, resurrection, growth… I’m of course deeply fixated on death.

For humanity, death is no longer the same as it once was. For most of our existence, images of a person did not survive them apart from the ones held in the minds of those who loved them. Today, for someone in the western world to live and die without ever having had a single photograph taken would be simply unheard of.

But I often wonder if that’s natural – to be able to see so vividly, without any effort on behalf of the mind’s eye, an image of the ‘dearly departed.’ There are myriad mechanisms in the brain designed to assist one in avoiding death, but there is nothing (to my knowledge), that exists in order to help once someone has died. To assist the person left behind, when their loved one succumbs to the inevitable.

I mean, if we’re all born to eventually die, why does death confound us so? We’ve grown smart enough to be able to ponder the notion of time, of existence before and after life (heaven, hell, etc.), of the ever-expanding universe of which our planet makes up the minutest particle – yet deep in our DNA we remain as primitive as ever. Like the chimps, like the elephants, even a murder of crows, we mourn when a member of our own has died. And apart from that shared pain, we cannot come to an agreement on the “why.”

If we’re so smart, why have we not stumbled upon the truth? Why have we not developed a real understanding of loss? Of death? Of what really happens? We are hardwired to live but certainly not designed to live forever. We’ve evolved to want to survive, to protect our loved ones so that they too survive – but should there not be a part of us, that is reserved for the acceptance that eventually – in spite of all of our defenses, in spite of all of our strength – even the lives of the ‘fittest,’ come to an end?

Perhaps such knowledge would work against our survival instincts. Perhaps it would foster a dangerous complacency with death. Could the two not coexist? The instinct that one must live but also the understanding and comfort with death’s inevitability? If you ask me, I’d say we’re woefully maladapted; our intelligence nothing more than an inconvenience, a cruel joke that makes our experience both so unique and harrowing. 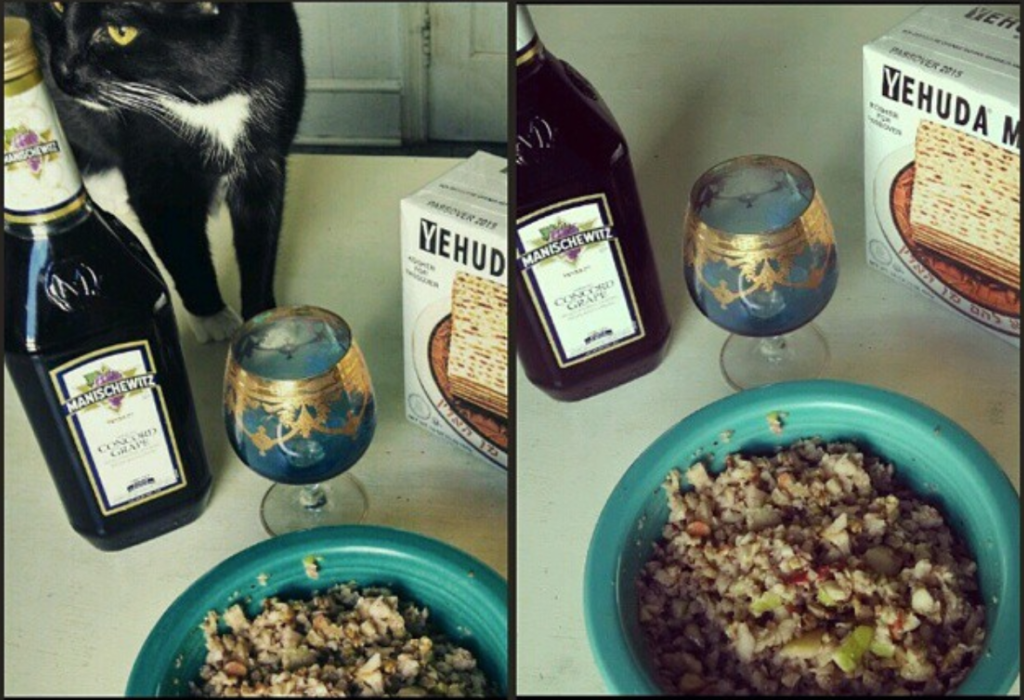 My very sanitary preparation of charoset from three Passovers ago…

Speaking of maladaptation! This weekend for passover I’m going to attempt to recreate my once-popular chocolate toffee saltines, but with an adjustment that caters to both my gluten intolerance and my jewish heritage. I’ll be substituting gluten-free matzo for the saltines… and this can either go very well or very poorly. Which is why I also intend to make a backup dish of my very special charoset.

For any goys reading this, charoset is a dish made of chopped apples, cinnamon, nutmeg, walnuts, and a dash of kosher wine (and for an extra touch of sweetness, one can add some brown sugar). It’s a food that Gwyneth Paltrow would co opt for her blog as a “Healthy, Sweet Treat for Your Bougie Potluck Picnic Party!”

Then on Sunday I’ll likely be attending the gathering hosted by my Irish Catholic side, for Easter. I’m pretty sure I can just bring a container of macaroni salad and be in-the-clear.

A small part of me looks forward to having an occasion for which to dress myself up; I don’t get out much lately and I love a good theme to inform my attire. Christmas reds? Got it. Spring pastels? I’ll find em’. If I can throw together a costume for it, I’m in.

I know of only one other person who approached her outfits with the same enthusiasm and creativity (not to mention the same taste), and as I’m sure you could have guessed… it was my mother. So like many things, I don’t take quite the same pleasure in it as I used to, as I can no longer share it with her.

The last time I shared something of this nature with her was right before Halloween, I was about to attend a party and per her request I sent her a photo of my makeshift ‘costume.’ The theme was “Cirque du Soleil Noir,” and while I had plenty of time to create a costume in the weeks leading up to the event, the stress and sadness of watching my mother dying was a bit of a distraction. So by the time the night of the party arrived I had nothing to work with but a polka-dot top and a white eye pencil with which I drew a heart on my face in the style of a Pierrot-clown. In hindsight, it did the job quite well! If only the party weren’t such a drag… 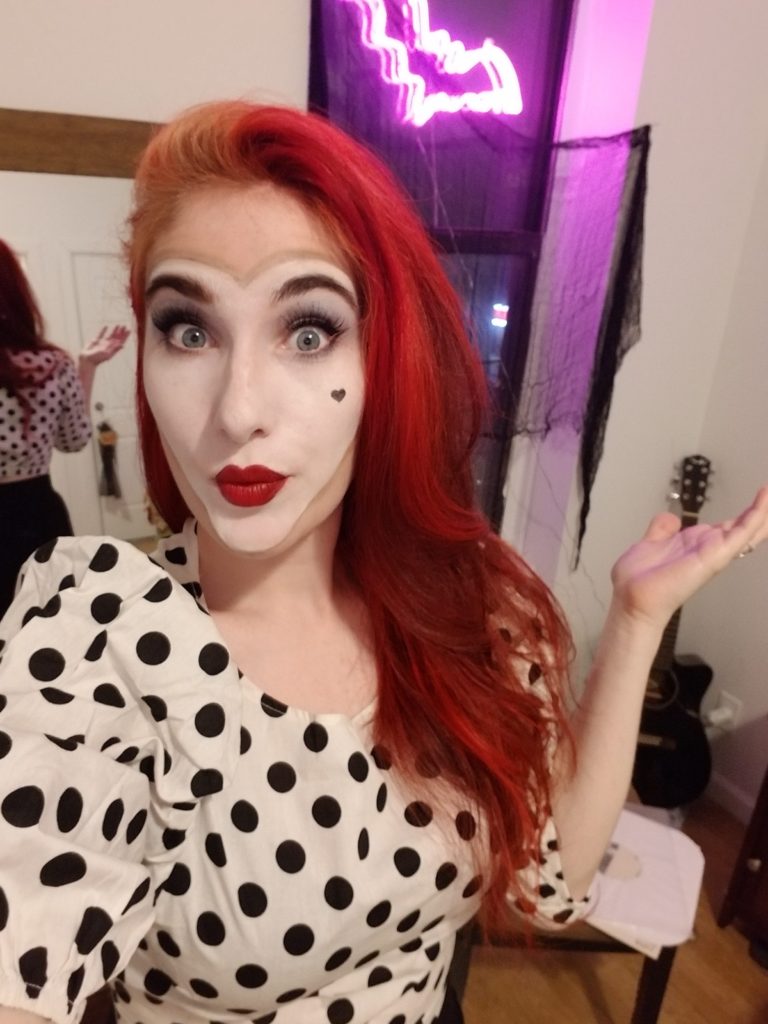 Well, I’m finding it challenging to wrap up this piece with any form of cohesion or satisfying denouement, so as usual I’ll just pretend it was an artistic choice to be a scatter-brained sad-sack and leave you with this:

I stumbled upon it as I was triple checking my spelling of “Pierrot,” and the words are so fitting, so haunting, that I believe they belong here. It’s the lyrics of the song “Columbine,” written by David Bowie in 1967 for a trippy-ass mime production called Pierrot in Turquoise, aka The Looking Glass Murders, in which you can see glimmers of Ziggy Stardust forming before he officially came to life in 1971. In the performance, the character Pierrot is staring at a mirror, or what is supposed to be a mirror as it is really just a frame behind which stands Columbine, his paramour and also, his reflection: