The coffeeshop I normally work in is closed for renovation, so I’ve brought myself to a bar nearby that serves breakfast during the day. I don’t mind it, but it has some downsides. Firstly, I’ve had several memorably bad experiences here (only during their bar-hours but regardless the place feels slightly tainted now), and while they taut decent coffee, free wifi, and tolerable tunes, they’re played at a volume that should just be reserved for the 6 o’clock crowd. Oh, well. I’ll make do.

I’m currently recovering from the flu so I’m still a little bit out of it, but it’s been nearly a week of not leaving the house and if I go another day I might start scratching at the walls. I resolved this morning that it was vital to put myself together and just get out. Although I don’t know if I’ve done such a great job – after sitting here for five minutes I’m suddenly very hot and as I tried to take my sweater off I realized I forgot to put a shirt on. Oops.

Anyway, this is now the fifth draft of what I was hoping would be my first post back on the blog after losing my mother. I’ve been trying to write one for weeks, but in my typical fashion, I reject everything that I manage to produce as subpar; unworthy of graduating from the safety of privacy to the scrutiny of shared work. It’s very easy to be guided by the belief that one can’t make progress due to circumstance; that something is always ‘getting in the way,’ rendering oneself incapable of thriving. I’m notoriously guilty of such a mindset. But if I’m honest with myself, I know that it’s really all me. I get in my own way, and that’s how it’s always been.

If you’re thinking, “This girl needs a therapist,” I know. Trust me. It turns out it’s a lot harder to find a therapist than one would think when you have the lowest form of health insurance available.

I’m actually quite impressed with the amount of psychological duress I’ve managed to pile on without the intervention of a mental health specialist. If they made a game of Bingo out of the DSM-V I’d have won several rounds by now.

It’s been ages since my last post and I don’t even know where to start. I’m not quite ready to fill in the blanks between the last (published a week before my mother’s diagnosis), and today’s, but I’m sure it could be surmised that it was hell, the fallout from which still lingers. 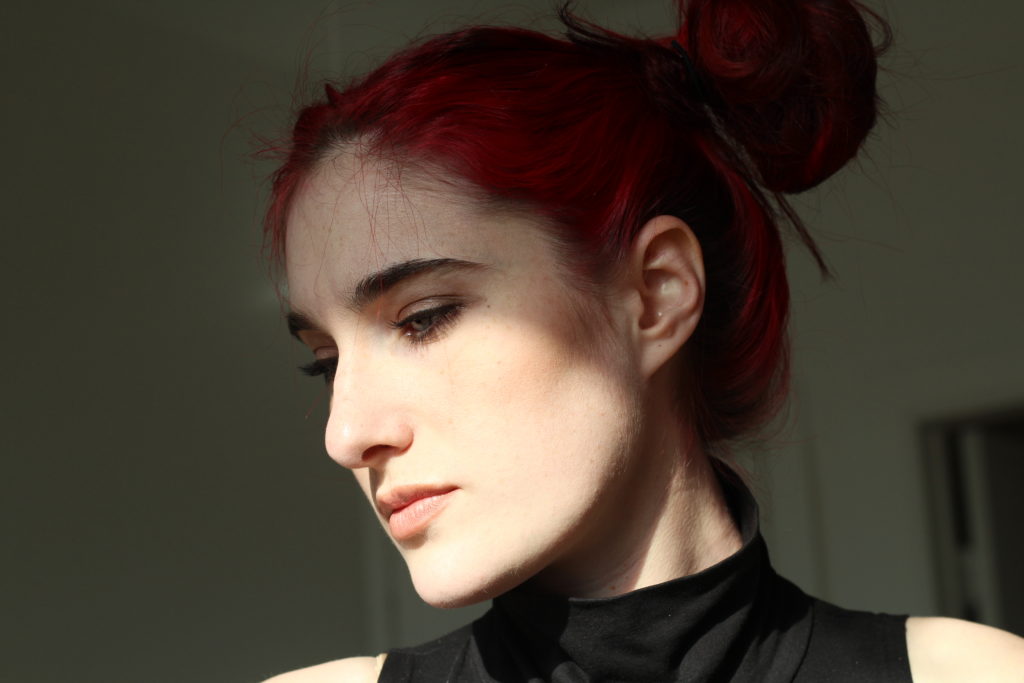 What I’m saying is, PTSD is real. Very real. Of course, I was never skeptical of the disorder prior to this experience, but I didn’t have a sense of the gravity of it, the way that it seeps into every moment of everyday. And not just your waking moments – it haunts your dreams, it pushes you out of your sleep with a start and demands to be felt. It is absolutely inescapable. The traumas that ultimately result in PTSD reshape your brain, they recolor your world, they make every moment- good or bad, tinged with the pain and anxiety that you want so badly to be behind you. Of course, I still laugh. I still smile. I still wake up everyday and try to do things that are good for me and good for other people, but underneath it all, lies a constant swell of sadness. I often wonder, if death happens to all of us, then why does it leave the living feeling so, so broken?

As I mentioned, in addition to grappling with the bewilderment of no longer having a mother, I still have those problems that I’ve had for all of my adult life. My protean personality has led me down so many wrong paths, paths that if I had any solid grasp of who I am, I would never have taken. Of course one could argue that there are no wrong paths, that each one offers its own equally valuable lessons, but I don’t buy it. The choices one makes can be indicative of a healthy mind or an unhealthy one, they can come from a place of self-confidence, or self-destruction. And I know exactly where I stand in that regard. And while I’m hoping that I could shift this behavior, it’s a lot like trying to stop the momentum of a speeding train. This is how I’ve been for as long as I could remember. At least since I was a teenager, when I first started experiencing depression. Certainly I have no intention of giving up, but when I stop to look at the work I have to do, it is awfully daunting.

On a lighter note, I don’t think I’ll ever tire of observing the ecology of gentrified Brooklyn. Coming to a coffeeshop on a weekday is prime for people watching, and I always keep my ears open to find out what brings these folks here; with hours to kill, laptops in tow, dressed in methodically messy habiliments and a countenance that signals they’re conducting ‘serious business,’ but without a frown line in sight. After accruing many, many hours as a loiterer myself, I’ve discovered that most of them are film makers or graphic designers, but sprinkled here and there are the outliers. I’ve listened to a pair of professional “art-welders”, a cadre of folks who shared both a podcast and a web series and were trying to determine if they should develop a video game based on the two (yes, I was just as confused as you are), a few people who rent warehouses in which to throw themed parties, and last but certainly not least, a life coach. Listening to her was inspiring… in that it inspired me to write a scathing essay on the pathetically self-serving idea of being a life coach.

I wrote it back in October when I first overheard her, but I never published it as I felt it to be a bit too biting a piece, and I loathe the thought of being attacked by an army of angry life coaches defending their fake occupation.

Now, back in my usual setting, attuning to the conversations of the folks around me, I regret not publishing the piece, because lo and behold, she’s back! In all of my days of frequenting coffeeshops, I’ve never encountered the same patron twice, until today. And my goodness, everything I wrote has just been confirmed true. Not that I need a pat on the back for my powers of deduction and basic understanding of human personalities but… wow. Screw it! I’m going to paste an excerpt of the hot vitriol I wrote when I first saw her back in October. If you’re a life coach, maybe steer away now.

There are many people who believe that you could spend your time telling other people how to get their shit together, and that this practice is a way to get your own shit together (a two birds, one stone scenario). Of course, this is absolutely untrue, as even the most renowned of mental health professionals will admit. The offenders of this behavior to whom I am specifically referring, are self help/life coach personalities. The ones who tag their various social media posts with titles like, “How to Be Your Best Self Everyday!” “How to Harness Your Creativity and Achieve Your Goals Now!” “How to Stop Doubting and Start DOING!” Selling the notion that there is an elusive, magic formula for how to…well, live.

I think I’ll make a video/blog/Instagram account catered not to those seeking motivation, but to those offering it. I shall title it: “How to Stop Channeling Your Own Neuroses into Tautological Self-Righteous Motivational Rhetoric and Actually Create Something REAL!” Okay. Is a part of me just bitter because I envy these people for finding a way to capitalize on doing essentially nothing? Of fucking course I am! But it’s still a frightening picture of the current state of our world when thousands of Tony Robbins disciples regurgitate this nonsense that only the loneliest and most hopeless of us are likely to fall prey to. Most egregiously, I’ve known more people who practition this sort of bullshit than I care to admit, and I can assure you that each one of them is just a failed actor. Yes, they’re all just people who didn’t make it in the entertainment industry who are now nursing a deep, deep wound of insecurity via their newly chosen calling. Don’t believe me? Talk to a life coach yourself.

As I write this, she’s chatting with her girlfriend, (also a life coach! Surprise, surprise), and she’s condemning a mutual friend for not heeding her ‘highly-qualified’ relationship advice. She says, “I tell her the same thing all the time and she doesn’t get it. I have like, really good advice to offer but she never listens to me so I give up. I mean like, she’s a good person but she’s just not smart.” That is a direct quote. And that, is nothing more than thinly veiled gossip. Not life coaching. Not professional. Not informed. NOT concerned. She continues, “Life coaching is basically psychology except it’s deeper than psychology because it goes to a spiritual level. It’s really all about the brain, you know?” Oh, girl. Now my blood is boiling and I briefly contemplate walking the three blocks back to my apartment to retrieve one of my college neuroscience textbooks, bring it back here, and swiftly chuck it at her stupid head.

See? It was a tad aggressive. But today, she’s here with a different person, having another unofficial meeting, although this time, it’s not about life coaching. It’s about – drumroll please – her acting career! The truth has been revealed.

She says, “I’m an actor and a singer, so I’m trying to make a music video, but I don’t play music. I mean like, I write lyrics, but I don’t play an instrument, so I’m looking for people to collaborate with.” She makes eye-contact with the smug redhead who’s been typing assiduously and staring intently at her and briefly stops her train of thought… whoops! I guess I am not as subtle as I thought. I’m gonna wrap this up now. I wish her well.

To everyone who read this, I hope you survived the longest January ever with your wits about you, and if not, I hope you recover them soon. With no job, no therapist, no social life, paralyzed by grief and trying to overcome a proclivity for making astoundingly poor choices, I’m hoping February will be productive, and a little bit brighter! Hey, in the very least, it’s shorter.