Tomorrow I leave this place to begin my next venture…

I’m going to stay with the Pages, a family in west Cork who need help with their children and asparagus farm.  The farm is small and there are only two kids ages one and four. Plus I’ll actually have my own space. I’ll be upgrading from my 8 x 8 closet with a daybed which doubles as a playground for rampant Greirson children, to my own fully stocked trailer/caravan located just off the property of the Pages home.

I already like the sound of this; both children and asparagus in small batches can be healthy.

But I don’t want to spend my last day in Malahide shifting my weight on an old green couch mooching wifi and suffering espresso induced heart palpitations. 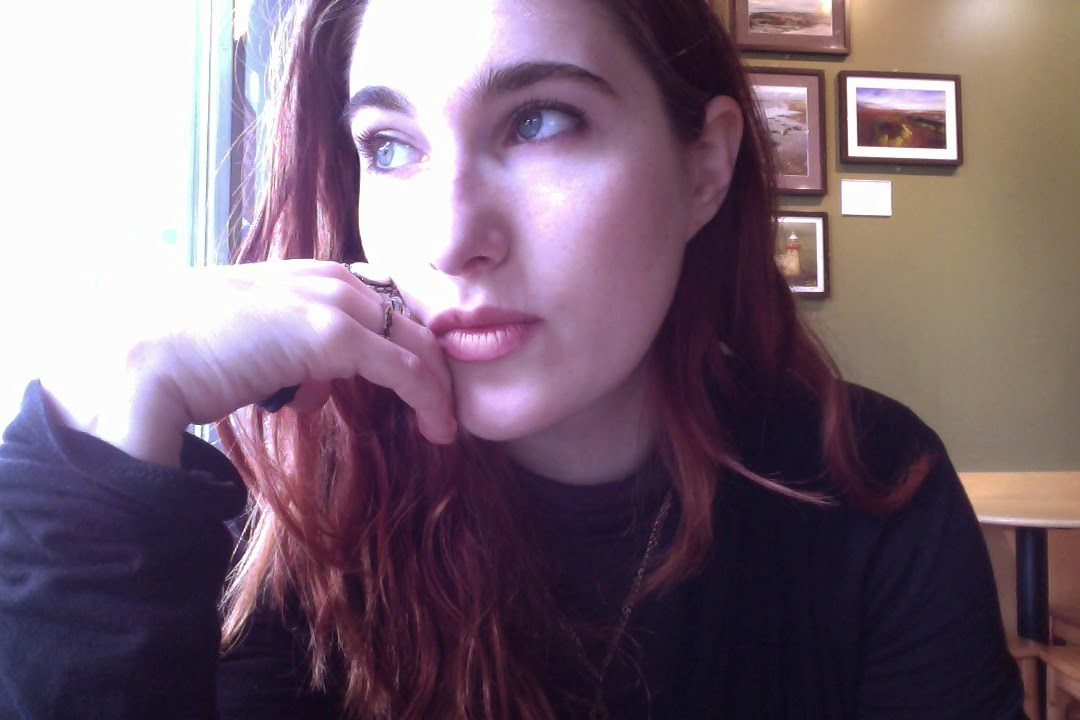 So I text Quinn.

Ever hear of a “meet-cute”? If you’ve ever seen a romantic comedy you know what they are. In real life they don’t really occur so much anymore, now that social media seems to intercept our every person to person encounter. But if you squint real hard at my story, you might just say it qualifies as a meet-cute. If you don’t want to squint… just pretend. Please. For the sake of my already tenuous self esteem.

This is how it happened…

Last Sunday I planned to go into the city with time to check out some vintage stores and maybe go to a couple of museums before they closed. My day was going to plan; I got dressed, had a coffee, walked to Malahide station and was about to board my train when I was suddenly overcome by a feeling of doubt. I only checked my route about twenty times on Google maps before I left. I was certain that this was the right train yet I heard a voice in my head, too powerful to ignore. “No, this is wrong,” it said. “This isn’t right, you cannot get on this train.” So I didn’t.

The train pulled away and as I watched it ride into the distance it exploded into flames.

No, sadly the truth is a bit less climactic. I sat down on a bench trying to figure out what had just come over me as I resigned to the forty minutes I would have to wait before the next train’s arrival. As I waited a young woman talking on the phone sat down next to me. Her voice felt like home. “Wow, is that what Americans sound like? I never realized how strange,” I thought to myself.

Well I couldn’t resist asking her where she was from and before I knew it our small exchange turned to conversation. As we boarded the next train together we discussed our backgrounds. My new friend’s name is Hannah and she is originally from Ohio but she’s going to school in Malahide to study history; I briefly mentioned my studies in psychology and neuroscience when a good looking young man with light blue eyes and brown hair wearing a black peacoat walked over to our seat. “Oh, you’re cute. Please don’t hit on Hannah, please don’t hit on Hannah,” I think to myself. He sat down eagerly and smiled at me,

“I heard you saying you’re a neuroscientist. That’s very interesting to me because I’m bipolar.”

Be still my heart. See? Meet-cute. If they can’t get Meg Ryan to play me I’ll take Kate Hudson. Thank you!

Having lived here for two years by this point Hannah is able to distinguish between a friendly Irishman making small talk and a person who is just… insane. She doesn’t hide her disconcertion. But I’m innocent and not quite as wary of strangers so I engage him,

“Oh, really? What medication are you on?”

I’ve just set in motion the first of what will be many, many, tangents I hear from Quinn. Like many others who suffer this disorder, Quinn has more energy than he knows what to do with. He speaks with such conviction (not to mention volume) that it is impossible to question his sincerity, but it is clear how his high energy can be off-putting to some.

“I don’t believe in medication. I treat myself with supplements and mindfulness meditation. People with BPD are usually B3 deficient,” he said as he pulled a conveniently placed bottle of Niacin from his coat pocket.
Now, I am not opposed to supplements… except when they’re bullshit and don’t work. Clearly, for Quinn, they don’t work. Not to mention if you saw the dosage on these things you would swear he’s using them to treat a manic depressive ox.

But to each his own. Hannah slyly managed to disengage by saying that she needs to show me where to go when I disembark and he catches on, returning to his original seat. Except as fate would have it when I stepped off the train at Tara Street I saw him standing not more than 5 yards away. He was looking over at me and I know he was anxious to continue his impassioned tangent on mental healthcare in Ireland. “Why not?” I think, “He seems harmless. And I can use the company. Plus he’s a hell of a lot more interesting than Barry.” So we walked into town together and before we parted we exchanged numbers. Oh yea, he lives in Malahide too.

Fast forward to today. I’m bored, it’s my last day here, I still haven’t been to Malahide Castle (yes I’m pathetic) and this is my last chance to go.

We meet outside the courtyard of the castle where once stood a resplendent english garden. It is now an Avoca cafe and tourist gift shop. But remnants of its bygone beauty still line the outer walls in colors that can only be seen to be believed. Lining the ground are bluebells and daffodils and lots of other flowery things I’m not nearly well read enough to name. I should’ve asked Quinn… 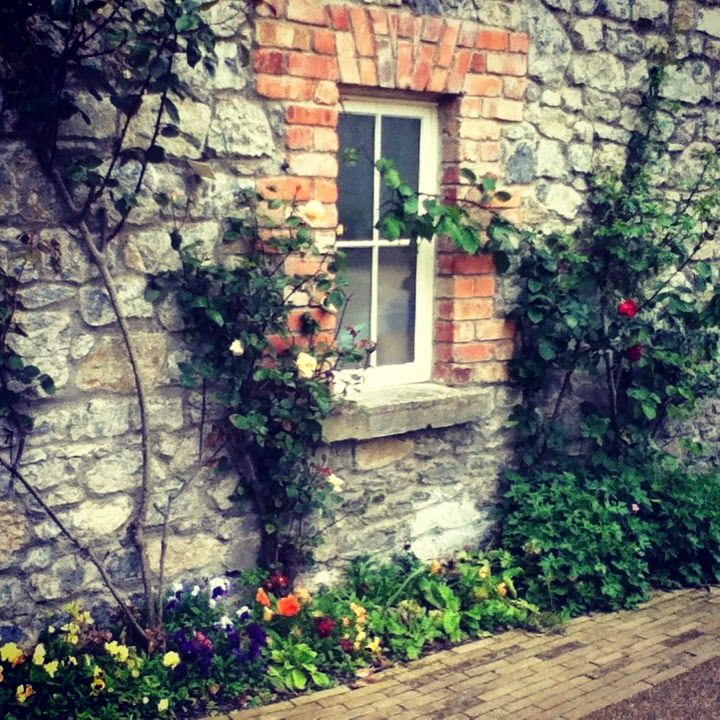 As we wait for the next tour of the castle to begin, Quinn uses his encyclopedic knowledge to educate me on the history of the Talbots, the family who owned the castle, how they tied into the history of the english monarch, the catholic-protestant saga of Ireland, where Ireland stands with England today, etc. He is so bursting with knowledge that if I didn’t know any better I would say he wrote the book on Malahide castle. Sure enough, after my history lesson with Quinn, the tour felt a bit redundant. 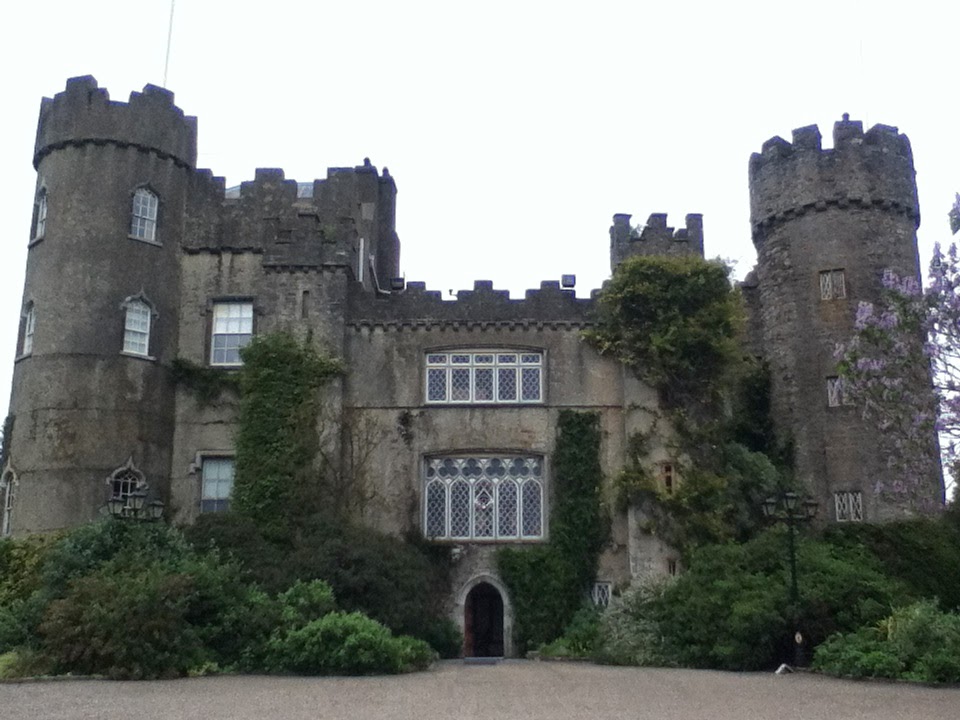 After the tour we take a walk around the grounds while he gives me the abridged version of Oliver Cromwell’s “reign of terror” in Ireland. He also slips in some rather ballsy flirting,
“You know when we were walking on the tour I couldn’t take my eyes off your ass. You have a really nice bum.”
“We’re walking around a five hundred year old castle and all you can look at is my ass?” I think.
But I don’t even pretend to be offended as the flattery far outweighs his tactlessness.
We make our way over to Avoca where according to Quinn they serve the best cheesecake in town. The restaurant is big and sunlit with glass ceilings and pale floral motifs around the walls. It looks like we’re about to have tea in a giant veranda. All the food is displayed behind glass cases like they were waiting for a magazine shoot. This food made to be photographed. 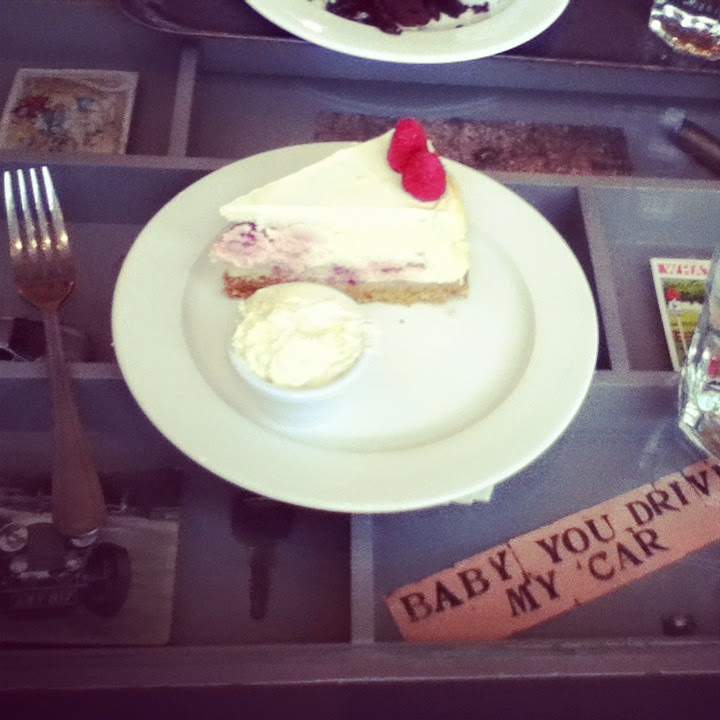 As I take my first bite into the beautiful slice of raspberry cheesecake I am completely crestfallen.
“I should know better than to trust a man with these things, ” I think as I chew over the weak paste of bland graham cracker and slightly sour cream cheese.
While I pick at my photo prop dessert Quinn begins his next tangent about how he would rather take a bullet or go to jail than allow his taxes to pay for legal abortions in Ireland. I attempt a counter argument but he’s so vehement about it (not to mention loud), that I consider changing my tactic to just ramming my crappy cake down his throat.

A few hours later, after hearing his take on religion, westernization, overpopulation, and gay marriage (that was a fun one), we part ways. I am exhausted from my day with Quinn but then I think of how much harder it must be for him. While I don’t agree with him on most things, I appreciate his remarkable intelligence and his company. To have a mind like his can’t be easy.

As the sun sets I walk along the shore of Malahide for the last time. I look out at the strange sea and begin to cry. Three weeks I’ve been here and now I’m moving on. I know nothing about where I’m headed. I’m feeling calm and anxious all at once. But I’m not lost.

The voice that told me to come to Ireland is the same voice that told me not to get on that train the other day. It’s the one that’s telling me to stick it out here instead of going back to New York. It hasn’t steered me wrong, and I vow to myself that I will always follow it.